Market segmentation and the Mentality model

From analysing the ads we found in our various corpora, it soon became obvious that not all 'modern' ads were targeting the same group of consumers.

In looking for a model that could help us further, we came across the Mentality model by Motivaction, basically a psychographic market segmentation.

It divides the consumers into 8 groups:


As expected, ads with the word 'modern' appear in most categories in the middle of the model, but we think we have found some - especially car ads - that appeal to the 'new conservatives' (also called 'techno-progressives' in a private communication by a Motivaction researcher).

An example of an ad that seems to be geared at this group is the 1929 Hupmobile ad we found: 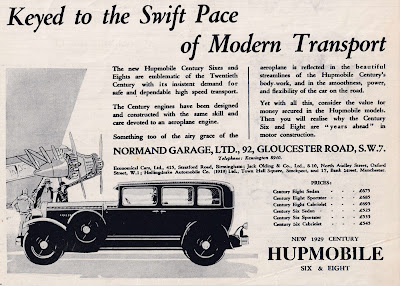 This ad praises the Century Six and Century Eight Hupmobiles for their technological sophistication: their engines are as complex and 'streamlined' as modern aeroplane engines, and give the car 'smoothness, power, and flexibility'. However, it isn't all about technological innovation for its own sake. While the consumer is told that the high-tech engines of the Century Six and Eight allow the 'high-speed transport' that characterizes the twentieth century, the cars are also prominently advertised for offering the more traditional values of being 'safe and dependable', and for offering good value for money. In this way, the ad appeals to both sides of the 'new conservatives', with their interest in technological change and emphasis on tradition.

That ads for essentially the same product could also be geared at totally different groups is nicely illustrated by two silverware ads we found. In the Mentality model, the 'modern mainstream' are focused on finding a balance between traditional values and modern consumership. They are family-oriented, materialistic and attached to traditional gender roles. 'Social climbers', by contrast, are materialistic, place importance on social status, and are focused on consumption and entertainment.

The WMF ad shows a young couple who will be using the WMF silverware set in their future home. As such, it is clearly geared at the 'modern mainstream': couples and 'young people' ('jonge mensen') preparing for their mainstream family lives together. The 1881 Rogers ad, however, with its focus on Hollywood celebrities, is targeted at 'social climbers'. In contrast to the WMF advertisement, this ad presupposes a group of consumers who want to model themselves on Hollywood stars through the goods they purchase - in this case, the 'Hollywood Ensemble' silverware set.

Of course, we are using the Mentality model to categorize the ads after the fact. Advertisers at the time didn't design their ads with this specific model in mind and, therefore, mapping ads onto it isn't always easy to do. It is important to note, as well, that not all ads fit into this model. However, as a tool for gaining insight into which groups advertisers wished to target, it proves useful. For one thing, it shows that ads with the word 'modern' in them were not all geared at similar consumer audiences.

Modern is not for everyone

Obviously, there are different strategies for reaching your target audience (or customer segment - more about that in a later blog). While there is definitely a substantial segment of the population that identifies with being modern, there is perhaps an even larger group that needs a different approach.

Mostly, advertisers use words and phrases such as 'old' [as in Old Grand-Dad, Old Forester, Old Crow, Antique (all bourbon), Old Dutch Cleanser], 'the way grandmother used to make it', 'Aunt Jemima', 'reliable', 'has been in use for two generations', 'since 1884',  etc.

This is mostly for products/companies that need a solid, reliable image, such as insurance companies and banks. You will also find it in household and food & drink advertising - perhaps because people are more drawn to food products that have been around for a long time, and have thus proven not to be dangerous.

It is rare to find it in automobile advertising, and I was surprised to come across an ad for National automobiles that actually addresses conservative people, see the illustration below.

This ad is also quite indicative of the attitude towards women at the time, but we'll save that for another project :-). For now I'll just quote a few lines from the text:

The National is a "Button Car" that appeals to a woman

She touches one button and starts the motor. She touches another button to turn on the lights. ...Everything is immediately and safely under her control. Her gown, of coat or hands cannot come in contact with anything that can soil them.